Welcome back! ScoreLeaper,
Register if you haven't joined the ScoreLeap Community yet!

"I still remember my first conversation with Kalyan when I went to him as I struggled to get past 690 on the GMAT. It was my DREAM to get a 720+ and no one believed in it more than Kalyan. "
Watch His Journey to 740 On GMAT!
GMAT – 740
MBA

I still remember my first conversation with Kalyan when I went to him as I struggled to get past 690 on the GMAT. It was my DREAM to get a 720+ and no one believed in it more than Kalyan. He told me I was a 740 candidate. I was dejected and low in confidence (imagine getting a 690 twice and before that I was unfortunate to get unsound advice).

I took his classes in July 2020 and was truly taken aback with his teaching style (especially SC!! – thankfully it was my problem area). I saw the same questions in a different way (the only way you can ace GMAT according to me is by learning to tackle the same question with a different approach). He was disciplined in his approach and what I though was most helpful was his caring nature. He knew how to max me out and in the right way. I learned his approach and solved and solved and solved!

Fast forward 45 days, I was dead in the heat of my applications. I had to make a call and I decided to concentrate on my applications with my score of 690 and not give the exam. Fortunately, or unfortunately, I did not get into the school of my choice.

Fast forward to April 2021. I studied again! I refreshed my skills (Thank you Kalyan for being supportive and guiding me even then), solved the OG questions again, gave the official mocks and went for the exam fully prepared. The test went exactly as I had prepared and made sure I did the SAME things I would do in a mock at home.

What I learned with ScoreLeap: Test taking strategy (timing is super crucial in Verbal) and the “Art of letting go”. Both may sound basic in terms of “tips” but it is only with Kalyan’s repeated emphasis and process that it really makes a difference. AND IT DID! Also, I realized that it is important to consult with someone who is really really credible and has been doing this for years. Unfortunately, the online test preps and some traditional coaches (nothing against them) are not really invested in your goals and achievements.

Finally, I would like to say that there is no substitute for hard-work and grit. So don’t expect shortcuts but expect ways to learn the shortcuts. 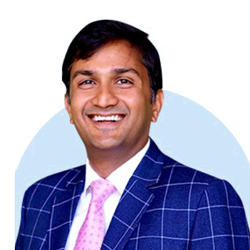 He does something different, he makes you believe that you can get a score - because GMAT is not only a test of concept but also a test of your mental framework.

ScoreLeap equipped me with all the tools to achieve a 700+ score in GMAT. The curriculum was well structured and thoroughly covered all topics.